Sixty years ago, on 10 November 1960, John Fitzgerald Kennedy was elected US President after one of the most exciting election battles in US history. The outcome of the election was very close. The defeat of Vice President Richard M. Nixon will only become official on the afternoon of the day following the election. 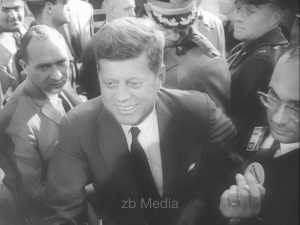 “Thus, in 1960, Chicago’s mayor and Democratic party leader Richard J. Daley secured John F. Kennedy’s razor-thin election victory over Richard Nixon by withholding Chicago’s election results until the results from the traditionally Republican rural Illinois became known. Miraculously, Daley then delivered just enough votes from Chicago to give Kennedy the majority in Illinois, and with it, the electoral college. Rumors of election rigging were not exactly dispelled by the fact that the Mayor of Chicago and his family were the first guests invited by the new President to spend the night at the White House. 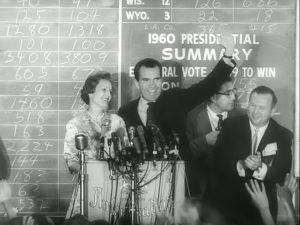 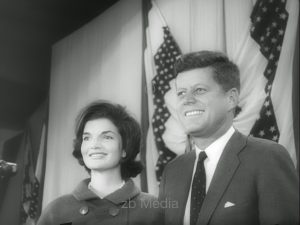 John F. Kennedy is 43 years old and becomes the youngest man ever elected to the US presidency. His Republican rival candidate Richard Nixon is 47, and compared to the presidential election 60 years later, Kennedy and Nixon are some 30 years younger than the candidates of today, Donald Trump and Joe Biden. This alone says a lot about the changing role of age groups in US society.

The newsreel also reveals fundamental differences in the political climate in the United States. The 1960 election results were very close. Kennedy wins by a wafer-thin margin of 49.7% to 49.6% of the votes cast. The US electoral system works in Kennedy’s favour in this election. The announcement of the final result will therefore take a long time. Nevertheless, the loser Nixon congratulates his opponent without reservation and accepts the election results. But in the weeks after the election, this changes. First of all: the parties, their candidates and supporters seem to have a more closely related profile at the end of the 1950s. Today, we are witnessing an extreme polarisation of the two political camps. Today, Donald Trump is threatened with civil war-like conditions if the result is delayed due to narrow majorities.

Epilogue to the vote

As early as 1960, the Republicans made every effort to overturn Kennedy’s majority there until the electoral college met on 19 December. Attempts were made to overturn the narrow vote in Illinois in favour of Kennedy, and the Democratic electorate from the Southern states, who were rather sceptical about Kennedy, was worked on. But the attempts failed. So, what Trump is painting on the wall today has basically been there before.

The supporters of the candidates

The composition of the cheering supporters of each candidate in the films is also interesting. The white population of the USA dominates the scene in Nixon, while Kennedy has a scene with leading figures of American blacks. Political observers in America suspect that the polarisation of the two American parties began with the election of Kennedy and the civil rights legislation in the 1960s. However, this view ignores the fact that Republican President Eisenhower has already sent federal troops to the Southern states to suppress protests against the Civil Rights Act of 1957. Sixty years ago, Eisenhower, Nixon and the Republicans were more committed to expanding the civil rights of blacks than the Democratic politicians from the Southern states. Therefore, in the end, Nixon’s attempt to influence democratic electors failed.

Finally, the Kennedys’ family pictures show another aspect of political mobilisation. The young couple, Jacqueline’s pregnancy, or the children are used as sympathetic figures to fill the candidate’s account with soft currency. All this was considered the beginning of an election campaign in the era of television and newsreels, i.e. the mass media of the moving image. Perhaps a still rather contemplative and predictable era, in which political discourse remained decisive in the end.

Today we have obviously reached a new level of media marketing. As the internet media live from polarisation, political fairness and respectful treatment of candidates have been replaced by a bottomless pit of mud. This is not to say that 60 years ago, hard bargains and all the media tricks available at the time were not used. The struggling candidates agreed on only one thing: respect for the personality of the opponent and concern about damaging the democratic institutions of society.

But this too is only half true. In the southern states of the USA, a bitter struggle for black equality was already raging at the time, with the white mob not shying away from murder and violence. However, neither of the two candidates showed solidarity with this violent white minority – that seems to have changed today.

Newsreel upon the election results

The Democratic Nomination Conference was held in Los Angeles from 11 to 15 July 1960. The following video shows the show, which in many ways resembles today’s Democratic or Republican (before Corona) party conventions. The fiercest competitor for Kennedy was Lyndon B. Johnson.

The nomination of candidate Kennedy in July 1960

In my opinion, the old newsreel videos illustrate very clearly the disastrous playing field in which politics is playing today. The rules of free, fair and fruitful debate among democratic candidates are often no longer observed.

The films are available for licensing on the Progress-Film website.

Further photos from the films are available in our Historical Library Historiathek for reprints or internet use.